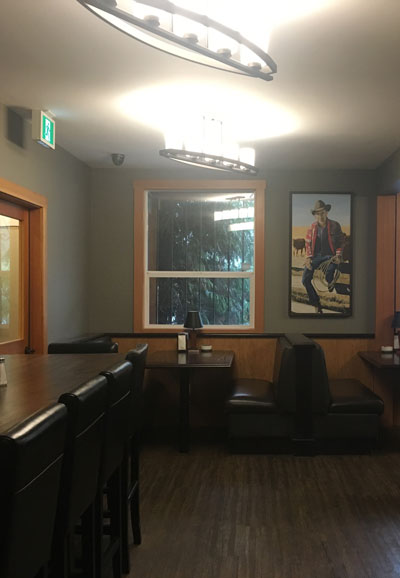 The Cranberry Arms was founded in 1878 by Michael and Anne Halloran who had moved from Nanaimo in 1875 after having won the property in a game of cards. It was then called “The Cranberry Hotel” and an advert in the Nanaimo paper from February 1, 1888 boasted: “This hotel having been elegantly furnished throughout, now affords superior accommodations to tourists, travellers and residents. The best of wines, liquors, and cigars will be dispensed at the bar, while the table will be supplied with the best the marker affords”. A 25-inch wall clock that used to hang in the Halloran’s sitting room may still be admired at the Nanaimo District Museum today. When Michael Halloran dies in 1887 at age 41, the hotel was passed on to his son James. Since then, the hotel has changed hands many times, and was later renamed to “The Cranberry Arms”. In 1996 rock blasting near the pub uncovered a 75 million year old palm fossil — the biggest Geonomites Imperialis ever found. It can now be seen at the Malaspina University-College campus. Wendi Aldcroft took over the “Crannie”, as it is fondly called by Cedarites, in 1982 and turned it into the friendly neighbourhood restaurant and pub that it is today. Many fundraisers to benefit the Child Development Centre and Special Olympics are help year round, and the tables are again “supplied with the best the market affords”. Enjoy your visit and a pleasant meal!